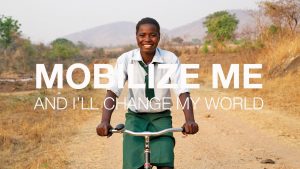 Happy International Women’s Day everyone. Today is a day that celebrates the social, economic, cultural and political achievement of women. And while I’m walking around my comfortable house singing “I am woman, hear me roar”, I think it’s important to reflect on the lives of women and girls around the world, who have so many challenges for even their basic needs.

Last week I met up with the fabulous Dagmar who is charged with the responsibility of starting the work of the amazing charity World Bicycle Relief in Australia. And this is where the International Women’s Day tie-in comes. World Bicycle Relief Australia is part of a global not-for-profit organisation that mobilises people in developing countries through the Power of Bicycles. World Bicycle Relief (WBR) provides its recipients Buffalo Bicycles, which are purpose-built for the rural terrain, sturdy, and easy to maintain, and Dagmar tells me that 70 per cent of those bikes go to girls.

World Bicycle Relief is helping girls living in poverty to access education by mobilising them through use of a bicycle. Many girl students in rural areas walk up to 2 ½ hours to get to school which often results in irregular attendance and even drop-outs. A Buffalo Bicycle, built for the rough terrain and easy to repair, helps them overcome distance and other hurdles (such as violence and sexual assault) while travelling to school.

World Bicycle Relief is committed to breaking down these barriers for girls, helping them achieve their educational goals and become change-makers within their communities and around the world. When women in poverty-stricken countries are educated it has a positive impact on the whole community – as reported by UNESCO in 2013:

WBR is also aligning itself with the world of professional cycling. It recently announced that retired pro-cyclist Carlee Taylor, XXI Commonwealth Games and Junior World Champion pro cyclist Alex Manly, and Olympian BMX pro rider Lauren Reynolds have jumped in the saddle as Australian Ambassadors to help create positive change through the Power of Bicycles.

As pro cyclists, these three athletes understand the difference that a bicycle can make in someone’s life. As ambassadors, they will be helping to raise the profile of World Bicycle Relief Australia’s  mission: to mobilise people by distributing specially designed, high-quality Buffalo Bicycles through philanthropic and social enterprise programs in developing countries. Carlee, Alex and Lauren will play a vital role in local fundraising and awareness-raising efforts.

So to celebrate International Women’s Day I challenge you to learn more about the work of this amazing charity, and once you’ve completed the reflection, why not make a donation to World Bicycle Relief.

As always share your thoughts on International Women’s Day and World Bicycle Relief via Comments or the Women Who Cycle Facebook page.