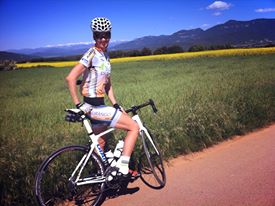 I’ve always wondered what it would be like spending part of the year living in Europe. My fantasies have centred more around hanging out in Tuscany for six months and learning to speak Italian but I’m also interested in what it would be like to live the life of a female pro cyclist (not that I have the talent).

You may remember I interviewed Aussie cyclist Jo Hogan in January before she headed for the cycling season in Spain. Jo is now part the way through a great season in Europe and she reflects on her own website The Healthy Cyclist what it’s like to spend part of her year there.

Q: I understand that 2012 was your first year living overseas and competing on a World Cup level.  Tell me about this.  Did you have a second language or did you have to learn Spanish?

A: Yes, 2012 was my first full season of racing on the women’s professional European circuit and competing at a World Cup level.  Racing at this level was like nothing I had experienced before.  The large number of women in the field, the courses, weather conditions and being part of a team where I was the only English speaking team member.  Being out of my comfort zone certainly kept me focused!

Unfortunately I didn’t learn a second language at school, so picking up Spanish definitely didn’t come naturally to me.  I have basic conversation skills and aim to improve on my Spanish in my 2013 European season.  There were so many new experiences that I faced in my first European season as a professional athlete.  It was a challenge to find time outside training, travelling and racing to attend beginner Spanish lessons.  My team speak limited English, so general conversations around the dinner table etc. are in Spanish.  I am definitely able to understand more than I can speak!

Q: How many team members in the Spanish team?  Are there any other Australians on the team?

A: There are 12 women on my team and I am one of two non-Spanish cyclists.  I am the only Australian team member. I am also by far the tallest!

Q: When on tour in Europe where does your team stay?  Do you all travel in a mini bus and stay in a caravan like bands?

A: The team generally stays in accommodation organised by the race officials.  This can vary from school dorms, to budget hotels and caravan parks.  We usually do most travelling to races in a day and sometimes stay in roadside hotels if necessary.

When we are traveling with the team, we usually drive.  We have a team truck, or ‘commune’ in Spanish and one team car.  The truck is equipped with a small bench/kitchen area, used for making pre and post-race food and organising drink bottles.  It is also equipped with bike racks, storage areas and a washing machine.

Q: Do you work a casual job when you are overseas?

A: I do not work while I am overseas as I have an intensive weekly training schedule and travel/race itinerary which requires flexibility – it is simply too difficult to work during the season.  I am a Qualified Nurse and have a Graduate Certificate in Critical Care Nursing. I try to secure part-time work when I’m back during the Australia summer – work needs to slot in around my training and race commitments.  It is critical that I work as much as I can (outside training and racing) when back in Australia to build up funds to support the next European season.

Q: Does your family support you financially?  How do you survive?

A:  My family and some generous people have donated and supported me the past two years.  This year I have fundraised and again received generous donations in order to race in Europe.  I am still hoping to raise more funds, as my budget is extremely tight.  The cost of the airfare, International Cycling License and Travel Insurance is around $6000 before leaving the country.   My team covers my accommodation and a small allowance, but it is about a twentieth of what is required to live overseas for seven months.

Q: What international race are you most proud of and why?

A:  I think the 2012 La Fleche Wallonne Spring Classic and the Emakumeen Euskal Bira were my best one day and tour results respectively.  I went into Fleche with confidence and aggression.  I committed to constantly pushing to the front of the peloton in order to not miss any opportunities and it paid off.  I made a critical split half way through the race and finished 21st.  Riding up the Mur de Huy with hundreds of Belgium’s yelling and cheering was spine tingling!

The Emakumeen Euskal Bira Tour in Spain was my teams ‘home’ race.  It also marked my 30th birthday and I was spoilt by a visit from my brother Ashleigh, his girlfriend Cherry and a surprise birthday gift of my friend Claire from Australia.  I had the loudest and most animated cheer squad in the race!  The whole peloton knew the crazy Australians were supporting Jo Hogan.  I rode outside of myself in this tour, I was in multiple breaks throughout the four days and I found myself mixing it with Emma Pooley and Judith Arndt.  I think it was this point last year that I gained a lot of confidence and truly believed I was capable of anything, if I committed and took opportunities. I finished 12th overall on the general classification.

Q: Do you enjoy competing in Europe?  Are the conditions different to Australia?

A: Yes, I love racing in Europe. The Europeans are so passionate about cycling and there is something magical about being part of huge bike races with hundreds of cheering cycling fanatics.  Cycling is engrained in their way of life, with bikes being used as major form of transport to commute around cities and towns.  When you visit places like Maastricht’s in Holland and see the hundreds of town bikes parked lining the streets, you realise how much they enjoy cycling.

The style of races and the number of women competing is why, at present, European racing can’t be compared with the Australian scene.  The racing is more aggressive and there are more women willing to take bigger risks in order to win.  Belgian local club level races regularly attract 70 to 80 female cyclists, all super strong and mostly very experienced, having started cycling at a very young age.  Racing World Cup competitions such as Tour des Flanders in Belgium and Trofeo Alfredo Binda-Commune di Cittiglio in Italy are like nothing I had ever experienced in Australia and are difficult to imagine, until you are actually on the start line with the 150 other women and commence racing.

A: I stay in touch with family, friends and my coach almost on a daily basis, depending on the internet connection available at races and different countries.  I am always available, as I have a Spanish number and an Australian mobile with me at all times.  Email, text messages and Skype, keep me connected with the world.  Using the European Wi-Fi network and making calls through Skype I find are the best ways to save on cost.