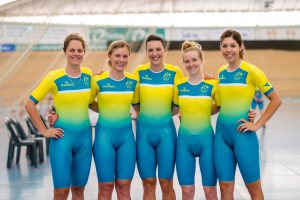 The Commonwealth Games on Queensland’s Gold Coast start next Wednesday so I thought I’d introduce the women of the Australian Commonwealth Games Cycling team. Here’s a rundown of the female Aussie cyclists who will be riding on the track, road and trails. The track program runs from Thursday, 5 April to Sunday, 8 April, with the women’s road race on Saturday, 14 April. The women’s time trial is on Tuesday, 10 April and the mountain bike on Thursday, 12 April 2018.

“It’s really not that often someone gets to represent their country in a home Commonwealth Games in their career, so for me it’s something very special that I’ll never forget,” said Amy Cure, a dual medallist from 2014.

“I am super excited to have the team pursuit on the calendar at the Games. I’m really excited to see what the team can achieve; as one of our three Olympic events, it’s great to get another opportunity to race this race in front of big crowds,” added Amy.

The Aussie mountain biker Rebecca McConnell is hoping the home course advantage plays into her hands when she lines up against a world-class field.

“I have been fortunate enough to race on the course at the Nationals Series in January, it’s a great course, with technical climbing and descending and the strongest rider will win,” said McConnell.

So make sure you tune in to see the women of the Australian Commonwealth Games Cycling team showing us how it’s done. Share your thoughts via comments or the Women Who Cycle Facebook page.