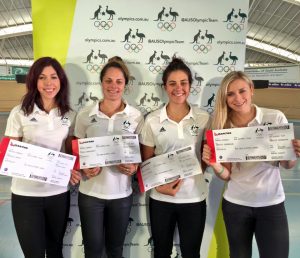 I’m super excited that the Rio Olympics Games are starting in a little over two weeks and thought I should help introduce you to Australia’s women’s cycling team for Rio. The Games of the XXXI Olympiad, as they are formally known, will be held from 5 to 21 August 2016 in Rio de Janeiro, Brazil. And despite all the naysayers about economic issues and other problems in Brazil, I think it will be a great event because the Brazilians sure know how to host a party.

The women’s cycling team for Rio includes four disciplines – road, track, mountain bike and BMX and we are represented by an awesome bunch of women in each category.

The women’s road race will be held over a 130.3 km circuit on Sunday, 7 August and will be followed by the women’s 29.8 km Individual Time Trial on Wednesday, 10 August.

The track program will run from 11 to 16 August with a variety of sprint and endurance events. Our team includes:

The mountain bike event takes place on Saturday, 20 August and Australia will be represented by:

The BMX events will be held from 17 to 19 August and Australia will be represented by:

Cheer on the Aussie women’s cycling team for Rio.