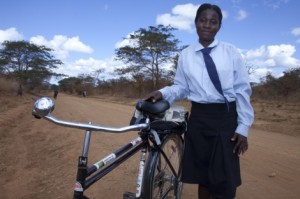 If you’re a regular reader of this blog, you’ve probably read about how taking up cycling four years ago has changed my life in a number of ways. But my story seemed insignificant when I recently read about a charity called World Bicycle Relief which is changing the lives of African people by providing bicycles for them to earn their livelihood, travel to school and assist aid workers.

World Bicycle Relief was founded in 2004 by SRAM President F K Day and his wife Leah Missbach Day in response to the devastation caused by the Indian Ocean tsunami. For those of you who don’t know SRAM is a bicycle component company.

My first contact with World Bicycle Relief (WBR) was via a foreword written by Leah Missbach Day in a book called Wheels of Change. The book is an historic look at how the bicycle has changed the lives of women around the world and I’ll know doubt tell you more about the book in a future post but at this point I’ll focus on WBR.

Throughout 2005 and 2006 WBR worked in Sir Lanka and provided more than 24,000 new bikes to help people rebuild their lives. Now WBR works in many Africa nations including Zambia, Zimbabwe and Kenya providing bicycles to volunteer caregivers, students and entrepreneurs.

For most people in the western world, a bicycle is recreational. But for many people in poorer nations it is an inexpensive, sustainable form of mobility, when mobility can mean the difference between seeing a doctor, getting to school, or making a living – or not.

Leah Missbach Day tells the story of a female student living in rural Zambia. ‘Mary Lewanika, a student living in rural Zambia, is having a profound experience in being empowered to steer her own course. At 17, in 2009, Lewanika was the very first student to receive a WBR bike. That day she said she felt safer already on the long, sometimes dangerous path to and from school. This is particularly important for Lewanika, as she wants to stay at school and graduate from college to become a doctor. After completing another year of school, Lewanika said in 2010, “It is unlikely I would have made it to the eighth grade if I didn’t have a bicycle.”’

She goes on to say that many African girls don’t attend school regularly because they are expected to attend to many chores before and after school. In Mary’s case she had an hour walk each way on foot to school and as a result of having the bike she now travels just 20 minutes each way allowing her to complete her chores and attend school. Life changing indeed.

WBR has developed its own sturdy bicycle to handle the rough conditions because the African environment is particularly punishing and the sort of bikes we ride for leisure in the western world would be totally unsuitable.