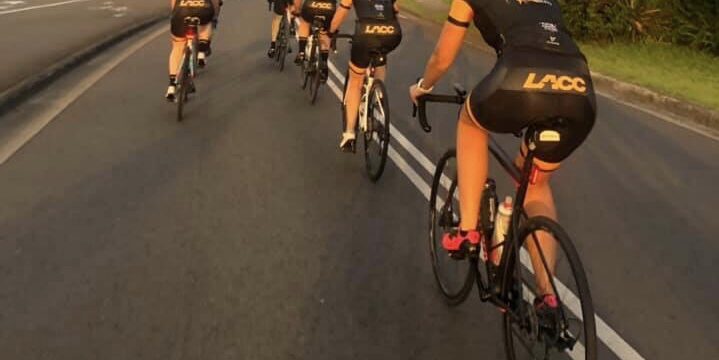 When I took up road cycling some 12 years ago I was really nervous about the idea of riding in a bunch but when I spoke to other riders and got some really good bunch riding tips, my attitude changed. I remember an older gentleman telling me on one of my early bunch ride forays that it would take me three years to feel confident on the bike. At the time it seemed a little conservative but when I reached that three-year mark I realised how right he had been.

From other riders, I learnt the great benefits of riding in a bunch, like drafting, safety in numbers and the social aspects. So here are a few bunch riding tips from me:

One of the great benefits of riding in a group is that you’ve got a collective of people all with two eyes keeping a look out for obstacles, issues and each other. So in the groups I ride with we let each other know if there’s an issue affecting our safety. This includes calling ‘clear’ or ‘car right or left’ at roundabouts and intersections, calling ‘pothole’ or other significant obstacle for the benefit or riders behind, called ‘car back’ if there’s a car passing the group, and signalling an intention to stop at lights, stops signs, etc.

That doesn’t mean you should ride down the road calling out every little twig. I work on the principle that you should call significant issues and just point to lesser ones. Some more experienced riders prefer to use hand signals exclusively, but I think particularly for less experienced riders it is better to use some calls.

Take a turn at the front

Give it a go

Don’t be intimidated by fast looking bunches. Find one that suits your pace, or preferably that goes just a little faster than you would normally, so you can challenge yourself. My Wednesday ride goes at a moderate pace and has a no-drop policy which means that we will never leave anyone behind. If you’re planning to join a bunch ride it’s worth checking what average speed they usually travel at and whether they wait for people.

Listen to other people’s advice

Learn from others who are more experienced than you. There is a lot to learn from the people in your cycling community so take the time to listen and learn. Don’t be afraid to ask questions and challenge their suggestions if they don’t make sense. We all start somewhere.

A year or so after I started road cycling I joined my local cycling club LACC which I am still a member of now, and I joined the Club’s bunch rides and learnt so much in a relatively short amount of time.

It is also important to keep your head up when you are riding closely behind another rider. Don’t stare at the actual wheel but rather look through them at hip level so that you can see if there’s an issue ahead of you.

Another important skill to master is to follow the line of the rider in front so you are not ‘overlapping’ their wheel. It’s alright to ride off-centre from them a little, but don’t let your front wheel overlap their back wheel and come up beside them, because if they move across they’ll bump your front wheel with their rear wheel and send you packing.

When you are following closely behind someone you need to ride at the same speed as them and remain consistent because you are likely to have another rider on your wheel. If you have to brake for some reason then tell the rider behind what you are doing.

Leading another rider safely and smoothly also requires practice and is not that easy to do well. With someone riding closely behind, you have a responsibility to keep them safe too, which means no sudden braking, or change of direction that might cause them to touch your wheel. There’s no compliment higher for me than another rider telling me that they like riding on my wheel because I ride at a consistent pace.

If you want to learn more about bunch riding I’d recommend reading this excellent guide from the Tour de Cure people.