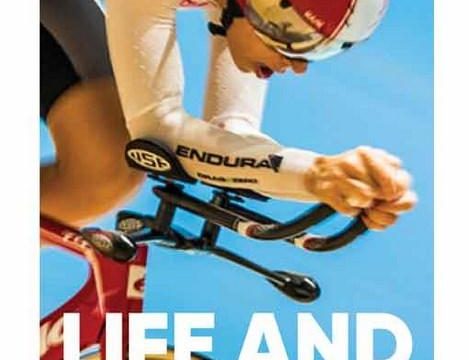 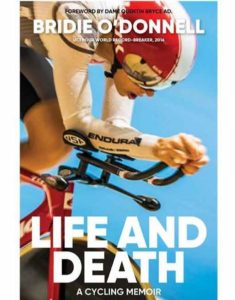 The very first interview (via email) I conducted when I started this blog nearly seven years ago was with Bridie O’Donnell, so I was very interested when I read that she’d penned a book called Life and Death – a Cycling Memoir. I’ve followed her career with interest since then, and wrote a second post after she broke the Women’s UCI Hour record the year before year. In fact, just after I published the second post I was in Geelong for the Cadel Great Ocean Ride and I spotted her across the road putting money in a parking meter. I raced across and introduced myself. It was great to meet her in person and congratulate her on the great achievement.

So you can probably tell that I’m a fan of Bridie O’Donnell and I also like her writing style, therefore you won’t be surprised to hear that I really enjoyed her book. It’s a really honest and brave account of her life as a professional cyclist. The insights into her gruelling training, and the huge highs and lows are inspiring. Bridie, like so many women is very critical of herself. It made me realise that a professional athlete can have as many doubts as a regular road cyclist like me.

She talks very frankly about death (hence the title) and doesn’t shy away from the huge risks that professional cyclists take when they train day after day on the roads. Her own experiences of losing several friends who were riders, seems to make her more determined to continue riding herself.

She also talks about sexual harassment and the parallels with the #MeToo movement. “During my five years as a globetrotting professional cyclist, I encountered many other instances of sexual harassment and inappropriate workplace conduct. Along the way I discovered that being a rider in an Italian women’s team was sort of a joke – you were considered ripe for being hit on, underpaid (or not paid at all), screamed at, left behind at races, not fed, not given information, or in the worst cases, physically assaulted. All those things happened to me.”

I also found it very disturbing reading about the culture around eating for the women in her Italian team. She recounts the training program of one of her fellow riders who took very long slow training rides and took no money with her. She did this so she wouldn’t be tempted to eat, and wouldn’t feel the need to because her training was not intensive. As a doctor, Bridie could see how unsustainable this lifestyle was and would likely lead to osteoporosis in her later years. She watched as many fellow female riders restricted their food intake to reach that perfect riding weight. In some cases it led to great victories, and in a few cases to illness. It’s quite bizarre to read that Bridie was considered too fat. When I met her I was struck by how tall and slender she is in person.

My favourite part of the book is when she breaks the hour record and recounts “as I slowed down and dismounted, I felt the most unbelievable wave of elation and satisfaction. In that glorious moment any fatigue was immediately washed away…..I raised one arm, a fist clenched in victory. I had beaten and bested a world record. I’d ridden 46.882 km in one hour. I had beaten my own fears and doubts, and proven myself right.”

I was pleased to read earlier this year that Bridie has taken up a new role that enables her to tackle some of these inequities in women’s cycling head on – she is now the Head of the Office for Women in Sport and Recreation in Victoria – and enjoying another unexpected career change.

I recommend you pick up a copy of Bridie O’Donnell’s Life and Death – a Cycling Memoir. It’s available from plenty of book sellers and her publisher Slattery Media who provided me with a review copy.

Let me know what you think of Bridie O’Donnell’s Life and Death – a Cycling Memoir via comments or the Women Who Cycle Facebook page.