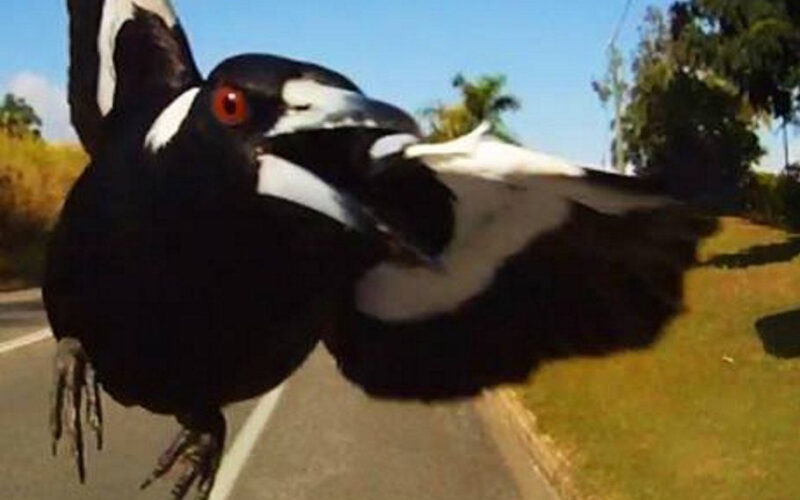 I know I write about this topic every year, but those swooping Magpies attacking cyclists are a really big deal in my home town of Sydney. For the record, I really love birds and think they play a key role in our urban environments. I particularly enjoy hearing the beautiful warble of the Magpies in the early morning but I’m not so keen when they dive bomb me while I’m riding by.

So far this year, I’ve evaded swooping Magpies but I doubt I’ll get through Spring without at least one angry bird trying to chase me out of his territory. But like many threats in life, by changing your attitude towards swooping Magpies, you can feel much more relaxed about the idea. How so, you might be thinking.

Over the past few years, I’ve realised that most Magpies don’t swoop cyclists at all, and of those that do, very few will make contact with you. The ones that do make contact will usually just tap lightly on your helmet and then leave you alone. One thing I’ve also noticed is Magpies generally come from behind so unless you see a looming shadow you’re not aware of the swooping until it’s over.

Having said all that, my main strategy to minimise Magpie swooping is to avoid the area, but if you find yourself in a surprise attack, the only way to handle the situation is to remain calm and continue on your way.

Most people are injured from falling off the bike or into oncoming traffic than the actual bird attack which is why it’s important to stay calm and keep riding.

Magpies seem to get most of the attention, but in my local area, there are a couple of very vicious Butcherbirds that re-emerge at this time of year to protect their babies.

Native birds such as Australian Magpies are highly protective of their eggs, nest and young and will often swoop at unsuspecting passers-by if they feel threatened. Other native Australian birds that are also common culprits include Butcherbirds, Kookaburras and Plovers, but even invasive species like Indian Mynas can attack at this time of year. Magpies seem to cop the majority of the blame but from my experience butcherbirds are more vicious.

Only a small proportion of birds swoop on people and these often have a preference for a few individuals that the birds recognise or certain types of ‘targets’ like cyclists. A Magpie will only defend its nest within a ‘defence zone’. For cyclists, this is usually an area within 150 metres.

Almost all swoops on people are carried out by male birds defending their eggs and chicks, which are in the nest for about six to eight weeks between July and November.

Here are a few other tips that might help:

Share your tips about swooping Magpies attacking cyclists via comments or the Women Who Cycle Facebook page.