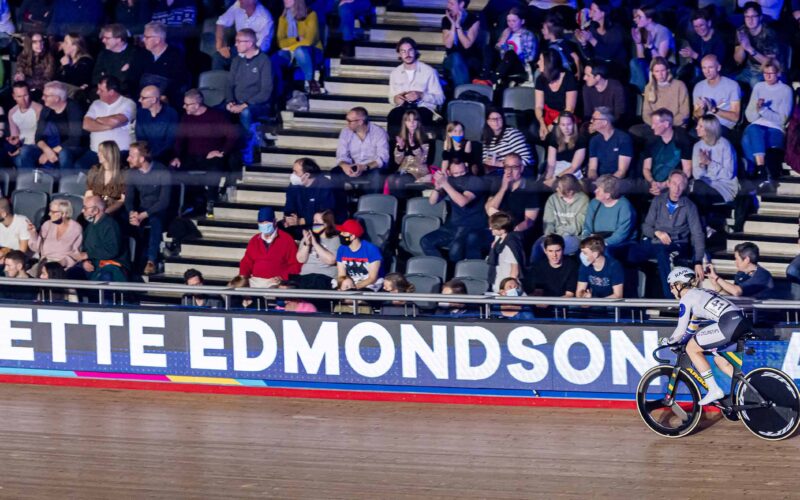 About a month ago I caught up with one of my favourite Aussie cyclists to learn about the next steps for Nettie Edmondson. I’ve been following Nettie’s career since I first started cycling more than 10 years ago. Nettie was a fresh-faced South Australian with loads of talent who was developing a pro cycling career on both the road and track, and I’ve enjoyed watching her progress.

My first blog post about Nettie was written in 2013 after I met her at a cycling event where I was lucky enough to join her on a group ride. In fact, I nearly collided with her when the group made a turn I was not expecting. That would have been a terrible way to make her acquaintance!!! Since then, I’ve interviewed her on three more occasions and even bumped into her at Melbourne Airport in 2018 when she was heading to China for a race, and I was heading to Japan for a cycling tour.

There are plenty of great articles about her retirement and career achievements, so I don’t plan to repeat any of that, even though it’s impressive, but rather I’d like to focus on the great optimism I found when chatting with Nettie just after Christmas. If you want to read more, I’d recommend Nettie’s own website post and an interview/podcast she did with Gracie Elvin.

I write most of my athlete interview blog posts, as a cycling fan rather than a journalist trying to get the latest scoop or uncover a controversy. I leave that stuff to others. By skipping the ‘hard-nosed’ stuff I offer a different perspective, and hopefully a more personal approach.

To give you some context to my recent chat with Nettie, I contacted her to set up an interview for an article I was commissioned to write for Bicycling Australia magazine. You can read that article in the March/April issue of the magazine, and I don’t intend to repeat much of the content here.

My chat with her was a few days after Christmas via Zoom while she was in isolation in Scotland, and I was at my home in Australia. Nettie is a busy woman who was in isolation after she caught COVID while travelling in Europe. Her isolation was in Scotland where she was visiting her aunt. Upon arrival in Scotland, her partner Kell received a positive test result which meant she and Kell were holed up in their accommodation for seven days. Lucky for them the illness was relatively mild, and once they tested negative, were able to spend a few days with Nettie’s aunt. And lucky for me that Nettie now had time for our chat.

But back to the main story.

Before the chat, I’d read and watched all the other interviews I could find about Nettie’s retirement and was keen to find a new angle, rather than just repeat what had been previously said. To my delight, Nettie revealed her retirement plans that she’d not mentioned to other media outlets. A scoop for me!

I’ve often pondered how hard it must be for athletes when they retire from competition. For full-time athletes like Nettie, it must be quite a transition.

Imagine going from spending your entire life focused on a goal like an Olympic gold medal. As a professional athlete she and many athletes like her, train nearly every day, and when they are not undertaking physical training, they are focused on eating the right food, getting the right amount of sleep, and maintaining the right headspace to compete. It’s like a 24-hour a day job.

Most of us, me included, work for no more than about six or seven productive hours for five days, and then take two off. The rest of the time is spent doing all manner of things – exercising, eating, drinking, sleeping, watching TV, reading, socialising, holidaying (when COVID allows), and more. Being an athlete is certainly a single-minded way to live.

Imagine that first day after you stop being that singularly focused athlete. I can’t actually. It’s too foreign.

But I digress again. Back to Nettie’s story.

She is setting up a sports management agency to act as a rider’s agent as well as mentor riders, particularly women. It is lovely to see and hear her enthusiasm for giving back to her sport and to fellow female riders who have been unrepresented. Up until fairly recently, most female cyclists could not afford the luxury of hiring an agent. Their salaries were so low (in Nettie’s case her first road contract was for zero dollars) that they couldn’t justify someone to negotiate on their behalf with teams and sponsors.

Nettie is following her passion but it’s not a completely altruistic move on her part. She plans to make it a profitable business. Her business plan also allows her to live and work in Europe (basing herself in Andorra) and spend time with her partner Kelland O’Brien who has a contract with Team Bike Exchange.

The alternative for her would have been to return home to Adelaide and enrol in a Uni course and move on from cycling. Becoming an agent allows her to utilise her cycling connections, stay within a world she loves, travel around Europe, spend time with her partner, and make a living. Sounds ideal.

I wish Nettie good fortune in setting up her new enterprise and will check in with her regularly to see how she’s going.

So, if you’re in the market for a cycling agent or mentor, Nettie is your woman. Her new business is Paradigm Shift Sports.

I hope you enjoyed learning about the next steps for Nettie Edmondson. Share your athletic retirement stories via Comments or the Women Who Cycle Facebook page.