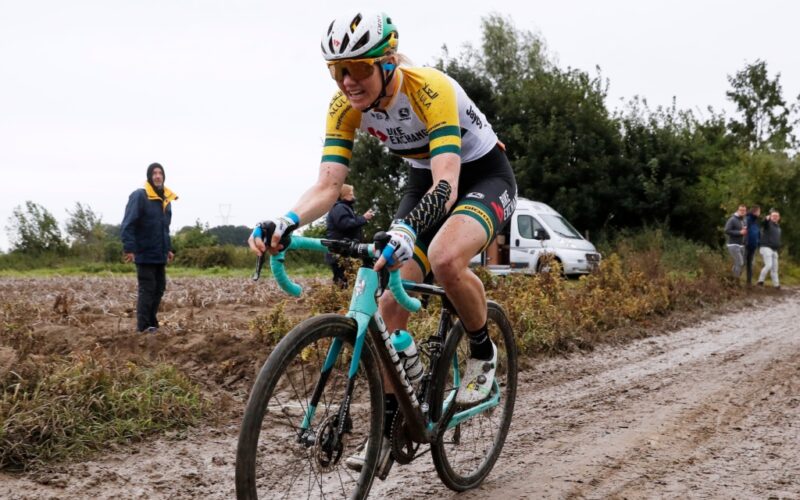 This year is going to be the biggest yet for women’s road cycling, so I’ve put together my list of women’s road cycling races to watch in 2022. The reason I’m making this claim is that this is the first year of the shiny new Tour de France Femmes race, and it alongside all the other races, plus the Commonwealth Games means it’s a really big deal.

My top five women’s road cycling races to watch in 2022 list is based on mainstream media coverage and the profile of the race. There are many others to be watched via streaming services, listed below but the five are chosen will all be on mainstream TV (in Australia) and no doubt other countries too.

So here are my top five in date order:

I recall watching a stage of the Giro D’Italia over the same white gravel roads about 10 years ago which Cadel Evans won in the rain. He was almost unrecognisable with mud caked all over him. Rain or no rain, it’s an exciting race and SBS will be broadcasting the race, as well as live steam.

Only in its second year, the Paris-Roubaix Femmes is much anticipated, after the inaugural race in October last year after COVID got in the way. The 2021 edition was an exciting race as well as being very significant for the women’s pro peloton. Read my previous post to learn more about that symbolic significance.

The men’s race has long been my favourite Spring class and it’s now been eclipsed by the women’s. It’s on Easter Saturday so you’ve got no excuse for not sitting up late to watch it. I’m pretty sure SBS will be broadcasting it.

The other huge race of 2022 for me will be the inaugural Tour de France Femmes which takes place immediately following the men’s race from Sunday, 24 to Sunday, 31 July. The opening stage takes place in Paris on the famous Champs-Élysées, then heads east through the beautiful Champagne district and finishes in the Vosges Mountains ski resort of La Planche des Belles Filles near the German border.

While I won’t be at the side of the road to cheer the women on, I am planning to get there to see this race live in the next few years. The women’s peloton has been lobbying for this race for many years and I’ve lent my voice to the cause a few times as well. I’m assuming SBS will get on board for this historic event.

The Commonwealth Games women’s road race is not such a big deal if you’re not from a Commonwealth nation, but it’s quite a prestigious race for Aussie road cyclists. The last edition in 2018 on the Gold Coast was won by Australian rider Chloe Hosking – what an exciting race. Chloe was clearly stoked to win it who famously said “People say for road cycling Commonwealth Games isn’t that big a deal but you know what? I’m Commonwealth Games champion and it’s a big f***ing deal”. Love your work Chloe.

I’m not sure if Chloe will be contending this again because I wasn’t able to find any information online about the type of course it will be, ie. flat for the sprinters, hilly for the climbers. Either way, I’ll be watching. I expect it will be on TV with whichever network is covering the Comm Games.

For the UCI Road World Champs, I will be watching live. Hopefully, I’ll snag a media pass so I can get up close, but either way, I’ll be there. It’s in Wollongong NSW which is about an hour’s drive from my place. This is beyond exciting.

It’s a fairly hilly course so I expect Aussies like Amanda Spratt and Rachel Neylan will be in contention, but I also wouldn’t rule out riders like Grace Brown and Sarah Gigante. It depends on who is in form and who leads the team on the day. It will be broadcast on TV for sure, right around the world.

There are lots of other races to keep an eye on in 2022 including a bunch of Spring classics and some amazing stage races. Many of these will be broadcast on streaming services like GCN TV and others.

Let me know if I’ve missed any races from my women’s road cycling races to watch in 2022. Use comments or the Women Who Cycle Facebook page.