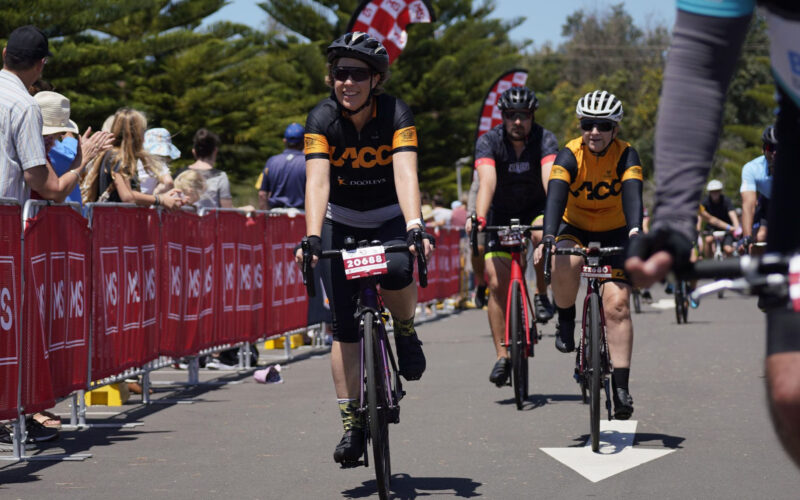 Yesterday I participated in Sydney’s annual MS Gong ride, and one of my friends Sharlene who I rode with, has written a fabulous blog post about why she’s going to stop apologising for being slow. It resonates so strongly with me because Sharlene and I have much in common. Like Sharlene, I avoided sport in my teenage years and have been putting myself down about it ever since. Rather than write my own version I’m sharing Sharlene’s excellent blog post with you. You can read some of her other great posts here.

Over to you, Sharlene…….

Of all her children, my mother tells me, I’m the last one she expected to be fitness mad. And fair enough. As a teenager, I was the least sporty of the lot of us. My parents and all my siblings played hockey competitively. I debated and acted and did things like come first in class.

The last time I played hockey I was 16. That was back in the old days when hockey was still played on a bumpy field of barely mown grass. Some revolting girl from Amanzimtoti High School launched, deliberately I maintain, a vigorously hit ball that landed squarely above my shin-pads. I hobbled off the field that day, handed my father my hockey stick and said, “I’m never playing hockey again”. I probably broke his heart. Weirdly enough, watching my son play hockey, I suddenly understood the appeal. Last year I thought about joining a social hockey side. But I can’t decide between that or golf or kayaking. And I’m unsure where to fit it in between running, and swimming and cycling, walking and yoga and the odd bit of strength training.

I’m quite the MaMiL. A Middle-Aged-Mum-in-Lycra.

But I’m not a very “good” one. I’m not running marathons or doing triathlons. I’m not fast at all. Not even close. I’m a tortoise in lycra, it would seem. Not a hare.  A TIL rather than a HIL.

Even as a child I was a slow-poke. I always came last, or near enough, in all the activities we were forced to participate in at school – cross country, athletics carnivals, swimming galas, high jump (a ridiculous activity I’ve never understood the point of). No wonder I hated physical activity. It was so embarrassing, and pointless.

My dad once told me, aged about 8 and trying my hardest in a cross country that saw me romp home second from the back, that I ran like a LEMAC (that’s a camel going backward). Funny yes, but hurtful. It’s a comment that sits in my head, issuing snide comments. It gave birth to a voice that says, “You’re so slow, what are you doing here? Who do you think you are to even show up?” It pipes up every week when I’m plodding along, shoulders hitched up around my ears, doing my 5km twice a week semi-religiously. Running like a camel going backward.

Age-old narratives are hard to shift. They’re programmed into you as a child, and reinforced through life by the way they filter our perception of our experiences. You have to work extraordinarily hard to change them.

But first, you have to recognise them for what they are. This one is not about my running style. It’s about my perceived lack of ability. It’s about perfectionism and competitiveness, and feeling like unless you’re the best, you’re inadequate.

It’s complete rubbish. But there it is, playing its depressing tune in my head.

Go away, I tell the voice. Feck right off.

But I have to reprogramme my brain, from whence our thoughts emerge. And you do that by replacing the dodgy thoughts with better ones. With 40-odd years in the bank, the pathway of “you’re not good enough” is a lot more established than the track that connects to loving self-acceptance. So, it’s going to take some time.

In the meantime, I’ve decided to stop apologising. I’m always saying sorry. Sorry for being slow. Sorry for being anxious or clumsy. Or useless at navigating. Or getting things less than exactly right. Saying sorry for just being me.

Yesterday I cycled 80km and ascended 970m. I just looked at the ride profile and thought, well thank the gods I didn’t see that beforehand! Holy guacamole. Just in case you don’t know – that’s a lot of powering up steep inclines and hurtling down the other side at breakneck speed. A lingering memory is the smell of brake pads filling the air.

There were moments of torment and anxiety – trying to jostle your way through crowds of cyclists, feet clipped in, balancing precariously at an almost standstill is bound to make an anxious person more so. Someone did cut me off, on a super steep hill. But I managed to unclip my feet and land on them rather than nose down on the road. Well done to me. A marked improvement from the previous week. He was so apologetic he pushed my bike up the rest of the hill, saying sorry over and over again. Now that is a place where an apology is acceptable. When you do something wrong. But not ever for just being oneself trying one’s best.

I can’t keep up with my cycle mates, but they don’t seem to care. They wait patiently for me, without any judgement. I don’t think I apologise for being a slow-poke at all. We ride over the finish line together. Exhausted but exhilarated. It’s a blisteringly amazing achievement. And I can see it for that. I’m beyond proud of myself. This exercise mad adult who has emerged from a kid who loathed physical activity because she was so rubbish at it… and who is now okay with turning up and having a go.

My mother tells me I’m an inspiration. Now that’s a voice I’m going to lodge in my head and keep on replay.

Thanks, Sharlene. I too broke that habit of constantly apologising for riding too slow many years ago and have benefited greatly from it. I just have to apply that same thinking to other aspects of my life.

Will you also stop apologising for being slow? Share your thoughts via comments or the Women Who Cycle Facebook page.